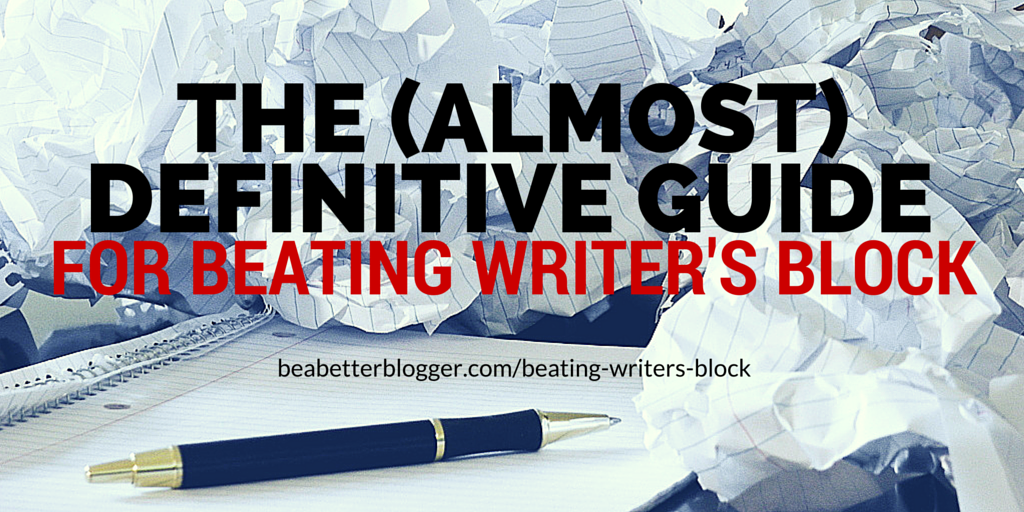 A clinical psychologist by the name of Dennis Upper decided to conduct a scientific experiment for curing writer’s block.

Sadly, disco music, bell-bottoms, and the birth of actress Amy Adams proved too distracting for Upper. His experiment was a failure.

Still, Upper decided to publish his work in the Journal of Applied Behavioral Analysis.

Here it is?in its entirety: 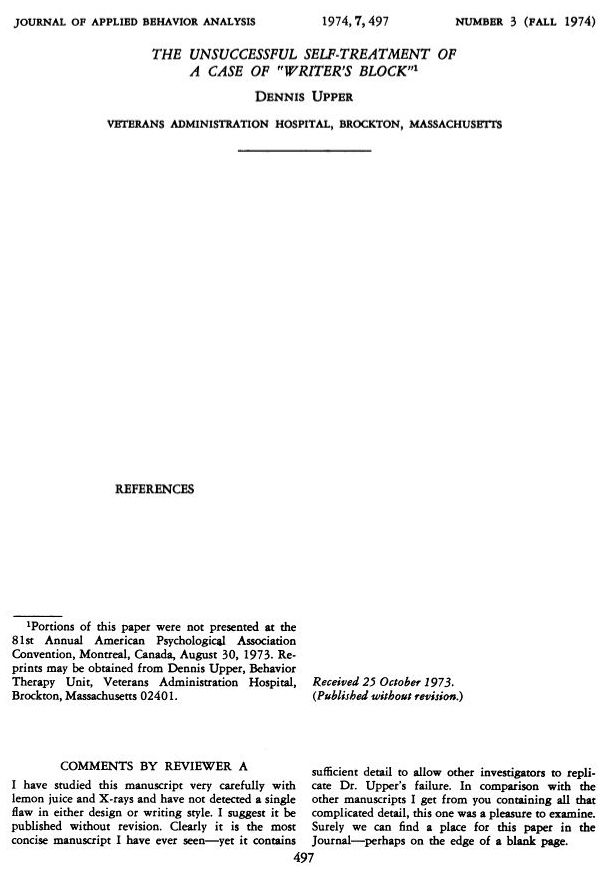 Brevity, Thy Name is Dennis Upper

Yes, Upper’s paper, which he titled “The unsuccessful self-treatment of a case of ‘writer’s block,'” was blank.

Your likely reaction to reading this is to run through the streets screaming:

IF DENNIS UPPER COULDN’T BEAT WRITER’S BLOCK?WHAT HOPE DO I HAVE?!?!?”

Such a response is natural. Don’t worry.

Besides, a brisk jog through the neighborhood is actually one of the many tricks people use to do what Upper could not: beat writer’s block.

Here are some more.

1. Tackle it One Bite at a Time

It’s been said the best way to eat an elephant is one bite at a time.

Mark Twain put it another way:

If you’re trying to write a post, don’t view it as one giant task. When you’re battling writer’s block, such a viewpoint can feel overwhelming.

Once you’ve broken the one post into multiple, manageable tasks, there’s only one thing left to do.

Besides being a helpful distraction to take your mind away from writing, reading the news could actually help you think of ideas.

Back when I ran a?humor blog, I was suffering from writer’s block when I came across the story of Einstein, the world’s smallest horse.

Within the news article was a photo of Einstein and an unnamed boy, who was petting Einstein while sporting what seemed like a knowing smile.

Immediately, a post idea popped into my head. I would write a story from the point of view?of the boy in the photo:

(whispers) As soon as my mom turns her head, I?m gonna ride you!

The post ended with the boy indeed trying to ride the tiny horse, but with less-than-ideal results.

It was one of the silliest things I had ever written. And it makes me laugh today just as much as it did back then.

And it beat my writer’s block.

If your writing is rambling, unfocused or incoherent, try the WIRMI trick.

Type (or write on paper) “What I really mean is” and finish your thought.

The WIRMI trick is great for simplifying what you’re trying to say and making it focused. Just be careful not to overuse it.

If Sebastian Junger had used it throughout writing The Perfect Storm, his book could have gone from 227 pages to this:

The sea was angry that day, my friends — like an old man trying to send back soup in a deli.” [tweet this]

4. Be Like Christopher Nolan – Don’t Start at the Beginning

Now, unless you want to frustrate your audience, I don’t recommend you implement this strategy exactly. However, a modification of this strategy?could work great for writer’s block.

Many bloggers and writers start by writing the beginning of their idea. Then they move on to the middle. Then they write the ending.

In other words, they often write it the same way readers will read it — from start to finish.

If you have a general idea for what you want to write about, but you’re having trouble putting your idea into words, try starting in the middle. Come back to the intro later.

Or, try writing the closing first. It may sound silly to write the “wrap up” for a post you haven’t even written yet, but it could force you to focus your ideas.

With a pen and paper (or your keyboard and a text editor), write everything you can think of for?the topic you’re looking to write about.

Once you’re done, review your “work” and see what shows promise and what should go in the trash.

I do this whenever I’m assigned to write an article for Country Outfitter. If I’m to write about “baseball,” for example, I’ll sit down with my wife and brainstorm different article ideas.

When we settle on an idea, such as “reasons you should go to a game this weekend,” we’ll then brainstorm a list of reasons.

That list will get edited and refined, ready for me to begin writing it.

But first, I’ll take a nap. Brainstorming is hard work.

What’s the difference between brainstorming and freewriting?

To freewrite, just write whatever comes to your mind. Punctuation isn’t really necessary. You just need to put words to paper.

True, the end result will likely look like the rantings of a lunatic.

Nonetheless, freewriting can tap into the creativity trapped inside your head. You could even find an idea or two you could write about among the random rantings.

And worst case, you’ll have some evidence should you ever need to prove your insanity during a trial.

Well, you don’t have to dance.

You could play a game of bowling on the Nintendo Wii.

You could go for a walk.

You could watch that “Hello Kitty” music video by Avril Lavigne.

The idea is to do something active that gets your blood pumping. Or, in the case of Avril Lavigne, something that scares you so your blood starts pumping. 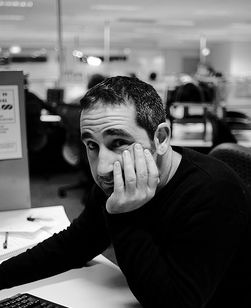 A few years ago, Copyblogger wrote about a copywriter named Eugene Schwartz and his system for writing.

What Schwartz would do was quite simple.

He would get a cup of coffee, sit down at his desk, and set a small kitchen timer to 33 minutes and 33 seconds.

During those 33 minutes and 33 seconds Schwartz could drink coffee, he could sit and do nothing, or he could write.

He couldn’t get out of his chair or do anything else.

Once the time was up, he would do whatever he wanted for 10-15 minutes, and then he would start the process all over again.

Basically, Schwartz let boredom motivate him to write. Sitting in a chair doing nothing is quite boring, so after a few minutes Schwartz would start writing.

He wrote to escape boredom.

We would need to leave ourselves with only two options: sit and do nothing for an extended period of time, or write.

If we didn’t cheat and committed ourselves to this strategy, it could be quite effective.

He did this so he could write. Grisham scheduled a time for writing.

The same time, every single day.

Or, you could try the exact opposite.

By mixing up your routine, you could break through your writer’s block.

11. Work on Multiple Projects at Once

This trick isn’t for everyone.

However, some people (myself included) work better when they are switching back and forth between projects.

If you’ve never tried it before, give it a go.

This trick helps minimize boredom. And while boredom can be motivation for some people (see: Eugene Schwartz above), it’s a cause of writer’s block for others.

12. Write Something Unrelated, but Funny

This tip won’t help you if you’re a humor writer, but assuming that isn’t the case…

We writers and bloggers take ourselves so seriously a majority of the time. Usually that’s fine, but when writer’s block is involved it can be a problem. Sometimes a little levity is in order.

To get your creative juices flowing again, write something completely random and fun.

Inspired by The Onion, I once wrote an op-ed about camping. Except it wasn’t “me” writing it. It was a bear writing it. A bear pretending to be a human.

The bear’s pseudonym? Bob Human. His goal? To trick campers so he could eat them.

Yes, it’s as silly as it sounds:

Hello, my fellow human beings! I don?t know about the rest of you, but I love to go camping in the woods. Is there anything as wonderful as driving out to some remote campsite for the weekend and ignoring those stupid “Caution: Bears in Area” signs?

The only thing I can think of that could possibly make the experience MORE enjoyable is smothering yourself in honey right before going to sleep at night!

It was silly. It was crazy. And it was fun to write.

If you’re suffering from writer’s block, try writing something fun!

Sometimes, a good nap or night of sleep can conquer writer’s block.

This is especially true if you haven’t slept in several days.

14. Read Your Previous Work Out Loud

There’s something cathartic about reading something you have written previously out loud.

It can jog your memory.

You’ll remember details from when you wrote it, which could help you today.

It can boost your spirits.

Oftentimes, we forget how good we are at writing. This is especially troublesome while enduring writer’s block. Reading something you’re particular proud of can help your confidence.

It can also give you ideas.

15. Quit While You’re Ahead

This trick helps prevent writer’s block more than it helps cure it.

It comes from Ernest Hemingway:

Always stop while you are going good and don’t think about it or worry about it until you start to write the next day. That way your subconscious will work on it all the time.”

In other words, when the words are flowing freely from your mind, don’t keep writing until they are all gone.

Come to a stopping point. Know what you will write next, but don’t write it. Save it for tomorrow.

Besides the benefit of knowing exactly what you will say each time you sit down to write, your mind will be working on the words, refining them, in the time between.

When you’re stuck, thinking about your audience can exasperate the issue.

Write as though 100% of your audience is your wife. Or your husband. Or your mom. Or your best friend.

Write to that person.

17. Imitation is the Sincerest Form of Flattery 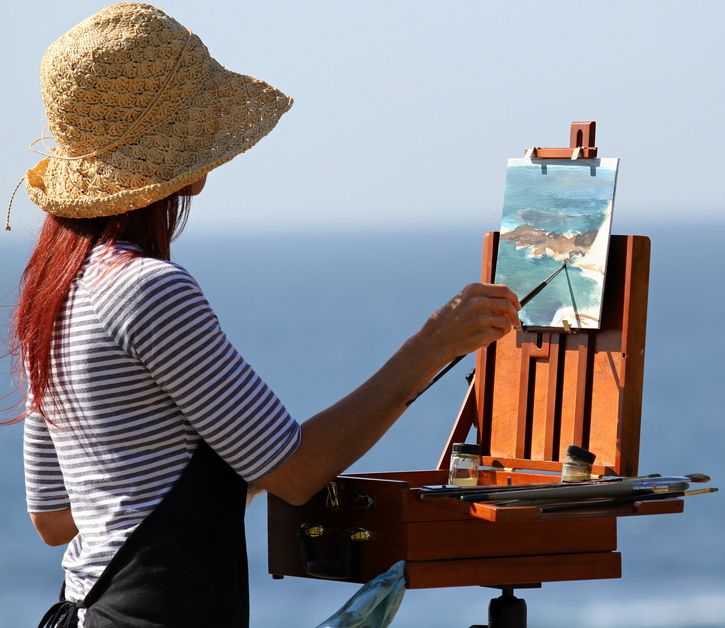 As Canadian poets Barenaked Ladies once said: “It’s all been done before.”

Maybe the reason you suffer from writer’s block is you’re trying to be original, and originality is a fool’s game. [tweet this]

Does that mean you should copy the work of others?

But it does mean you should gain inspiration from the work of others and, yes, imitate them.

A couple years ago, Henneke Duistermaat of Enchanting Marketing wrote a post titled The Sin of Originality.

In it she shows how successful people ranging from Pablo Picasso to blogger Jon Morrow mimicked the success formulas of others.

They looked at what worked for others, imitated it, put their own spin on it, and presented it to the world as their own.

And you know what? That’s basically what every successful person does!

If you want to beat writer’s block (or if you just want to be inspired), read the works of others.

Look at how they do things. Look at what worked from them. And then sit down at your computer and do your best imitation.