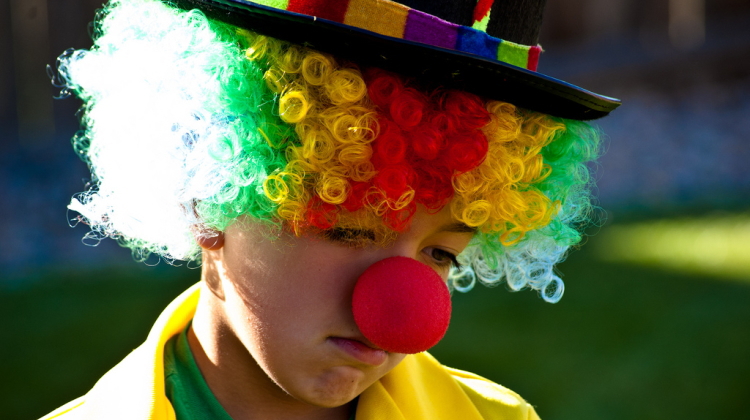 Young Oliver’s plight is one felt by most bloggers. Whether we have a little bit or a lot, we all want more traffic.

Last week, I conducted an experiment here at Be A Better Blogger. In an effort to prove there is no “one right way” to succeed as a blogger, I ditched my customary blogging schedule. Instead of writing one long post as I do every week, I wrote 5 “short” posts:

I should note it was?my goal to keep the posts between 500 and 750 words each. However, only one of the five?met this goal. Two of the?posts exceeded 1,000 words. In other words, my rambling ways got the better of me.

Still, the results of the experiment were surprising.?There was a considerable difference in my weekly comments, social media shares, and — yes — traffic.

Sit back, relax, and prepare yourself for a Be a Better Blogger first: It’s time for a blog traffic case study.

When compared to the three previous weeks where I only published one post?each week, the week of five posts easily came out ahead on social media shares.

For the week, the five posts received a total of 255 shares between Twitter, Facebook, and Google Plus.

However, taken individually, none of the five posts matched the social shares received for one of my typical, once-a-week posts. The closest was “The reformed procrastinator?s guide to repurposing blog content,” which had 32 Tweets, 8 Facebook shares, and 36 Google Plus shares. 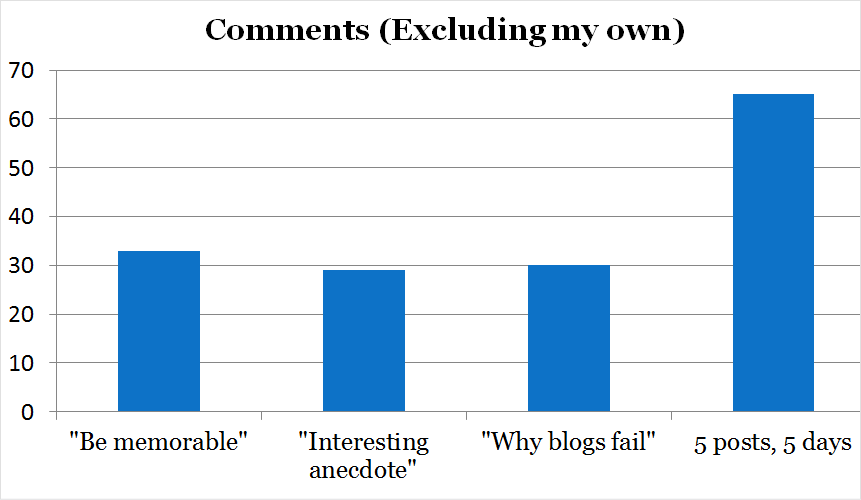 As I expected would happen, the total comments for the five posts bested the comments I typically receive in a single, weekly post.

Of course, while the total engagement for the week was higher, on an individual-post basis the comments were much lower.

Of the five posts, “The?reformed procrastinator?s guide to repurposing blog content” led the pack with 20 comments, but “Know your audience” and “What a 4-hour meeting can teach us about blogging” had a measly 8 comments each.

To my surprise, not only did the bounce rate for the week of 5 posts not go up, it actually went down.

The week of 5 posts in 5 days had a bounce rate 0.98% lower than the previous 3-week average. Also, its average session duration increased by 12 seconds.

It should be noted these numbers keep in line with the current trends of Be A Better Blogger. With each passing week, its bounce rate is going down and its average session duration is going up. These trends can be attributed to its age (the blog is now 4-months old) and the increase in quality readers as more time goes by.

All this to say, the modest improvement is not surprising. What is surprising is the fact the positive trends continued despite the fact I had less time to devote to each post. 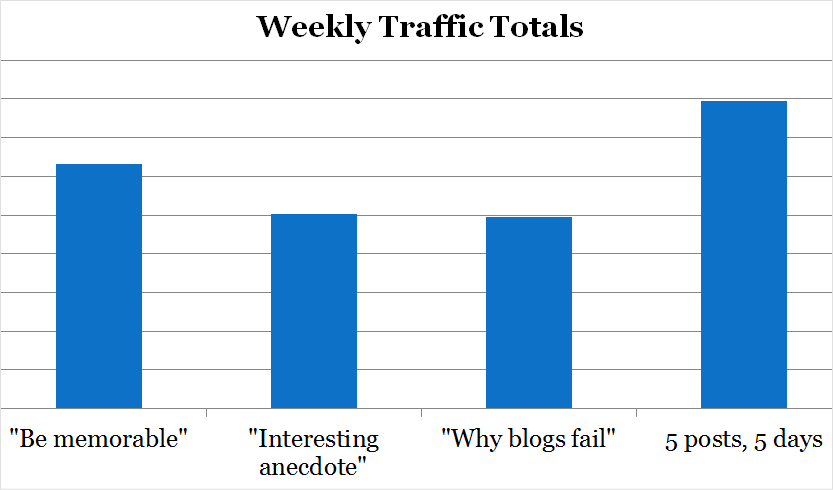 And then we get to traffic.

When compared to the previous three weeks where I published one post per week, the week of “5 posts in 5 days” saw an increase of 46% in traffic.

In those three weeks, traffic was slow Sunday through Wednesday. Once the posts were published, traffic spiked on Thursdays, remained high on?Fridays, and began to dip on Saturdays.

Day-to-day traffic during?the week of 5 posts was a bit different:

In the week of 5 posts in 5 days, traffic was higher than usual?Monday through Wednesday. It began to dip on Friday, and the dip continued on Saturday. It’s merely speculation on my part, but I imagine reader fatigue?played a role in Friday’s dip.

“Statistics are nice, but what are your thoughts on the experiment, Kevin?”

Despite the increase in traffic, comments, and social media shares, the experiment left me feeling cold. Here are the reasons why:

Several weeks ago, I wrote a post titled “How to write a blog post: The definitive 8,317-word guide your mom will understand.” Despite its length, it wasn’t a post I had been working on behind the scenes for weeks and weeks. No, it was written during the same one-week time frame.

As you can imagine, I was exhausted that week. I essentially wrote 5 week’s worth of words in a single week.

But you know what?

All totaled, I wrote 4,630 words in those 5 posts. When you consider I usually write a single?post of 1,500 to 2,500 words each week, this is the equivalent of packing 2-to-3 weeks of writing into a single week.

And then you have blog comments. I try to respond to all comments my wonderful readers leave me. Sometimes I get behind, but eventually I catch up. Well, when you receive 65 comments in a week as opposed to 33, 29, or 30; you have to devote twice as much time to commenting.

This might not be a big deal if your replies are of the “Thanks for commenting” variety, but if you try to write in-depth responses the difference is noticeable.

When someone visits your site for the first time, they typically look at your latest post. If it has a lot of comments and a lot of social media shares, they think: “Wow, this guy or girl must know their stuff.”

A downside to publishing frequently is your “latest” post is never the latest for very long. As such, its comment count isn’t going to be as high. Its social shares count won’t be as impressive. In short, its social proof is going to be lacking.

The weekly posts I write, when you count my own responses, will have comment counts in the 50s, 60s, and 70s. To a new user, this is impressive.

At various times last week, my “latest” post would have a small handful of comments. Or, worse, zero comments for long stretches of time. A user visiting me for the first time would look at these numbers and assume I have no readership. Such a user would be less likely to comment on their own, share my post, or subscribe to my mailing list.

3. No time to promote

Yes, I already covered how exhausting frequent publishing can be. This is related, but different.

When you write once a week, your posts have an entire week of your undivided attention.?When you publish daily, they get one day. Tops.

In short, the post got a week’s worth of love.

The 5 posts in 5 days didn’t feel quite as enamored. They received less promotion, less comments linking to them, and they had to compete with one another for clicks in my weekly newsletter.

This decreased the chances for one of them (The reformed procrastinator?s guide to repurposing blog content, perhaps?) becoming a hit and going viral.

Here are a few things I learned last week:

Would I ever do something like this again? I have a hard time imagining a scenario where I would want to write daily. Could two posts a week work? Possibly. But right now, one in-depth post a week fits my schedule.

Infrequent publishing allows me to promote, read and comment on other blogs, continue tweaking my blog design, and write guest posts for others. It allows me to spend my evenings with my lovely wife, rather than with yet another blog post publishing the next day.

In short, it allows me to balance all the things in my life which need my attention.

Plus, infrequent publishing?doesn’t zap all of my joy. So it has that going for it. Which is nice.