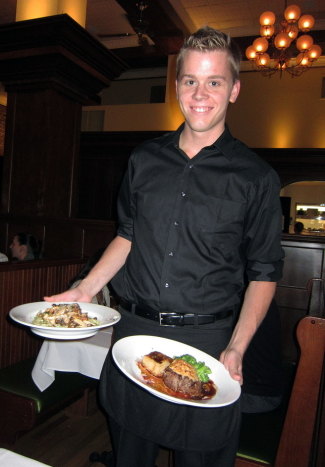 After church on Sunday, my wife and I stopped by Subway for lunch.

The employee asked us what we wanted, but as soon as my wife opened her mouth the employee walked away. Apparently, the bag of lettuce in her hands needed her full and undivided attention.

After returning from her life-or-death-lettuce ordeal, the employee repeated her question to my wife. After taking the order, the employee picked up a piece of bread that had been sitting on the counter in front of her and plopped down two slices of cheese on top.

My wife turned to me.

“Was that the same bread sitting out when we walked up?” she asked me. “Because if so, there was a fly.”

Just to be safe, I asked the employee if my wife could have a new piece of bread. “There was a fly on it,” I explained.

With the understanding and grace of a grizzly bear being chased by hornets, the employee grabbed the bread and flung it into the trash.

Compare this to our experience shopping at Lowe’s one day later.

As we were shopping, an employee named Leon greeted us and asked us if we needed help. Leon then proceeded to walk us around the store until each and every item on our shopping list was gathered. Along the way, he greeted at least a dozen other customers.

Both of these employees are memorable, but for very different reasons.

To say the Subway employee needs to take a class on customer relations is an understatement. She treats her job and ? by extension ? her customers as burdens. She would rather be doing something, anything, else ? and it shows.

She’s unlikely to ever be promoted. She’s unlikely to impress some sandwich-loving, billionaire-in-disguise customer who decides to pluck her from obscurity and hand her the keys to her own restaurant.

Heck, she’s unlikely to still have the job three months from now.

On the other hand, Leon could teach a class in customer relations. He acts as though he loves his job and customers ? he has a spring in his step that’s infectious. He’s very likely to be promoted one day soon. He’s very likely to impress some random customer who is looking for hard-working employees for his/her own business.

If he doesn’t have the job three months from now, it’s only because he’s moved on to bigger and better things.

How do you treat your customers?

Are you gracious to readers who leave you comments?

Are you kind to those who email you with questions or requests?

Do you enjoy interacting with them?

There are a lot of talented bloggers out there, but there are significantly fewer successful blogs. Ever thought about why that’s the case?

Oftentimes, it’s something as simple as treating your readers ? your customers ? with respect.

Show them you care and they’ll advocate for you. They’ll tell all their friends about you. They’ll defend you against those who dare to sully your good name.

Treat them like a nuisance and they’ll vow to never eat at your sandwich shop again.