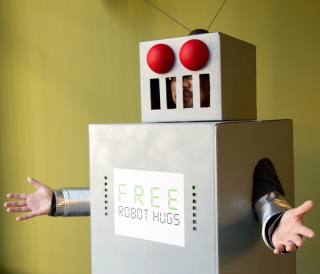 Grocery stores will offer free samples of something that looks like meat covered in sauce of undetermined origin and people will ask for seconds.

Dog owners will cover their neighborhoods in “Free Puppy” signs and their phones will ring all day long.

Heck, strangers will hold up signs that read “Free Hugs” and people will walk up and wrap their arms around them.

There’s a catch, though. People love free, but only if they’re the ones to initiate.

If you walked up to someone on the street while holding a container of questionable-looking food and said “free samples”, only crazy (or very hungry) people will take you up on your offer.

If you rang the doorbells of your neighbors and handed them a puppy, a majority would tell you “thanks but no thanks.”

And if you went around hugging people while muttering “don’t worry – this hug is free”, well… you’ll end up in prison.

No matter how amazing or valuable your free offer may be, people will turn their nose up at it if it’s forced upon them.

Violinist Joshua Bell is able to pack theaters at a whopping $100 per ticket, but when he played incognito at a Washington subway a few years ago few people bothered to even stop and listen.

U2 has been one of the world’s most famous bands for three decades, but people were outraged when they partnered with Apple and pushed their latest album – for free – to millions of iTunes libraries.

“How dare you put this album on my iPhone without my consent!” people shouted at Siri, who responded with cruel indifference.

Things got so bad the band chose?to publicly apologize… for giving away their music… for free.

We’ll post links to our posts in comments. We’ll bombard our friends, family, co-workers, and acquaintances with requests to share our latest masterpiece. Heck, some of us will go as far as manually adding anyone who’s ever emailed us to our mailing lists.

Want some free advice that might be hard to hear?

Most of those individuals don’t care.

They don’t want our links cluttering the comments sections of the blogs they read. They don’t want to hear about our latest and greatest whatever on Facebook. They certainly don’t want us emailing them without their consent.

It’s a tricky balance, but the art of promoting without being pushy is something all bloggers need to learn if they want to be successful.

Yes, write that amazing eBook, email series, or in-depth article. Yes, offer it to people for free – it’s a great way to promote your blog or business.

But don’t beat people over the head with it. Don’t push it onto people who literally could not care less about you or what you’re offering. Don’t give it to someone who didn’t ask for it.

If you ring doorbells with outstretched arms or puppies in hand, prepare for a lot of slammed doors in your face.

And mace. You’ll probably be maced a few times, too.