Were my eyes deceiving me?

“Surely I can’t be seeing what I think I’m seeing,” I told myself.

“You are seeing it,” I responded. “And stop calling yourself Shirley.”

“It’s a beautiful house,” I had told the Realtor ten minutes earlier.

It was built in 1868. Eight rooms in the house had access to a fireplace. It had pine floors. It was over 4,000 square feet. It had almost an acre of land.

I was strongly debating whether or not to buy it.

How could I not?

After viewing the house, I decided I needed a night’s rest before making a decision.

As I’m about to make a right-hand turn to head home, I noticed a pedestrian walking on the sidewalk. I stopped and waited for the man to pass me.

And then I noticed what he was wearing.

The man was shirtless.

However, I didn’t notice this at first because part of his torso was covered by a cape.

This shirtless man, who was walking directly in front of a house I was considering buying and for all I knew would be my neighbor, was wearing a cape made out of what appeared to be an old bed sheet.

As he turned his head to look at me, I made sure the doors to my car were locked.

The face of what I assumed was pure insanity then smiled at me.

“Yeah, I’m not buying this house,” I said to myself.

Whether it’s home buyers, members of the opposite sex, or blog readers; we all do things to scare away audiences.

Some of the things we do are subtle.

Some are as obvious as a tattoo on the chest of a shirtless man with a cape.

To figure out why you are losing blog readers…

You need to take a fresh look at your blog.

You need to see it from your readers? viewpoint.

You need to find the proverbial ?shirtless men with capes? who could be scaring readers away.

Here are some common places to look.

1. Do you make people?use CAPTCHA? 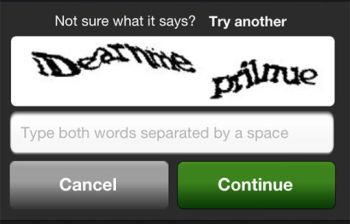 CAPTCHA is a method for determining if the user attempting to leave a comment is human.

There will be a picture of a distorted word (or words), and you have to type what the picture says in an input box.

It’s one of the most evil and aggravating things on the planet.

The distorted words given to you are often impossible to decipher. So, you hit the refresh button in the hopes of receiving new words you can understand.

When those words turn out to also be unreadable, you’ll hit refresh again.

If you have to click refresh fewer?than 73 times, consider yourself lucky.

I’ve come across some WordPress blogs which require registration just to comment. Unless they are related to you or you’re quite popular, readers are unlikely to oblige.

In short, don’t make it harder than it needs to be for readers to leave you comments.

Your blog isn’t a night club with a bouncer out front. Let people in. [tweet this]

Should you respond to one-sentence comments such as “great stuff” or “thanks for this”?

That’s for you to decide.

But if you’re not responding to insightful, genuine questions left to you by blog readers, you’re running the risk of alienating those readers.

Don’t believe it’s possible to respond to every comment?

She often receives 100+ comments in a single post, but she responds to each and every one.

According to Adrienne it’s about common courtesy:

For me to ignore (that you took the time to come to my blog, you stuck around and read my post and you were kind enough to leave me your thoughts) is just down right rude and I don’t care how many comments I get, you are special to me and I appreciate it.”

Yes, there are bloggers out there who do not respond to comments. Maybe you could be one of them and not lose readership.

The percentages say you shouldn’t gamble, though.

When you do reply to a comment a reader has left you, be sure your response is adequate. By this I mean if someone leaves you a comment similar to the following:

This post is the most wonderful, amazing thing I have ever read. I followed you on Twitter, Facebook, Google+, Pinterest and Tumblr, even though you aren’t on Tumblr. There was another guy on Tumblr with a name similar to yours and I followed him just in case he is related to you!

I eagerly await your response!

It is not okay to simply reply with the following:

If someone goes to the effort to write you and ask you questions, give them a little bit of your time.

(Even if they’re a tad crazy.)

3. Is your blog mobile friendly?

I’ve mentioned this one before, but it’s important.

As more and more time goes by, the greater number of mobile and tablet readers you’ll have on your blog.

If you want to send them running for the hills, by all means make sure your blog isn’t mobile friendly.

However, if you want keep those readers, you need to make sure your blog works for them.

Aren’t sure if your blog is mobile friendly?

It will show you how your blog looks on mobile and tablet devices.

On the other side of the coin, don’t ignore desktop and laptop users in your quest for mobile friendliness.

Many office workers read blogs at work on their lunch breaks or during down time. They typically use desktops or laptops, and this will not be changing for a while.

Look, no one likes the grammar police.

(Actually, that isn’t true. I like the grammar police. In a disorderly world, what’s wrong with a little order? Am I right?)

My eccentricities aside, most people don’t like the grammar police. And most people won’t leave your blog if you have typos here or there.

That being said, there is a difference between “typos here or there” and, say, the butchering of the English language taking place every minute on Twitter.

This one is very much “in the eye of the beholder.” Some readers will tolerate Rosie O’Donnell levels of bad blogging grammar.

However, others will not.

If your target audience is writers, for example, they’re unlikely to keep reading you if you’re not correcting your spelling mistakes before hitting “publish.”

5. Too many guest posts

Guest writing is a wonderful thing.

However, it is entirely possible to overdo it.

And if you’re accepting too many guest posts for your own blog, this is potentially an even bigger problem.

Because your readers come to your blog for you.

If they didn’t like you, they wouldn’t be reading your blog. Correct?

So while sharing quality guest posts with your readers is great, make certain your readers are still getting what they came for: a healthy dose of you. [tweet this]

They’ll thank you for it.

How many guest posts is “too many” is subjective and will depend on you and your blog.

Darren Rowse of ProBlogger and Jon Morrow of Boost Blog Traffic only write occasionally on their sites, but they appear to have zero trouble growing and retaining readers.

Crystal Paine of Money Saving Mom, while allowing guest submissions, still writes a majority of the posts?on her blog.

The key is knowing your audience and why they read your blog.

Ironic in a way even Alanis Morissette could understand, the intro to this post is 360 words.

When I was a high school teacher, I used anecdotes to make whatever I was teaching more relatable and entertaining.

And as a blogger, I often write (hopefully) amusing anecdotes for the same purpose.

But you know what? An anecdote of 50 words can be just as amusing as anecdote of 100 words. It also has the benefit of being shorter to read.

In other words, don’t be wordy for the sake of being wordy.

You could lose blog readers long before you get to the point you wanted to make.

Don’t be afraid to learn from others.

No matter how experienced, knowledgeable or educated you may be, there is always room for improvement.

A big thanks to Henneke Duistermaat for giving me some editing tips, which I used in the editing of this intro and I’ll definitely be using in the future.

Go check out Henneke’s blog. If it doesn’t motivate you to be a better blogger, I’m afraid you cannot be motivated.

Losing readers is something we all face from time to time.

Usually, it’s nothing to worry about. Sometime you’re up, sometimes you’re down, and usually there will not be a tangible reason for either.

Still, sometimes there is a reason. Sometimes you’ll lose readers because there is a shirtless man with a cape scaring them away.

If that happens, you will have a choice to make: do something about it, or let him take up permanent residence on your lawn.

Hopefully you will do the former.