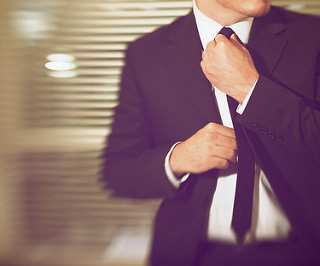 I interviewed two gentlemen for a job last week.

One of them wore a suit and tie. The other wore bluejeans.

If you knew nothing else about these two candidates, which one would you expect me to hire?

The candidate who tried to make a good first impression, or the one who didn’t give it a second thought?

The candidate who wore an outfit reserved for special occasions, or the one who wore the same thing he’d wear if he was going to eat BBQ ribs?

The candidate who looked the part of a professional, or the one who looked like an extra in a Levi’s commercial?

“You never get a second chance to make a first impression” is one of those expressions that has been repeated so many times it’s lost all meaning, but it’s true.

First impressions are hard to shake.

If you show up to a first date with spinach in your teeth, you’ll never outlive that first impression. Even if you end up happily married to this individual, it’s going to be one of those oft-repeated stories told time and time again at dinner parties and family gatherings.

If you’re lucky, your loving spouse will refrain from telling the story at your funeral. Of course, you’ll still have to endure God welcoming you to Heaven with an “is there any spinach in My teeth?” joke. The Big Man Upstairs has a good sense of humor, after all.

That’s the power of first impressions – they follow you everywhere.

This power can be a good or bad thing, of course. If you have a habit of showing up to job interviews in bluejeans or dates with spinach in your teeth, it’s a bad thing.

But if you make it a habit of leaving positive first impressions, it’s a game changer.

Would you send short and impersonal responses to reader emails? Would you write unhelpful comments that suck? Would you curse like a sailor on Twitter?

Next time you’re ready to hit the SEND button, take a good, hard look at what you’re doing. Ask yourself, “Is this the indelible first impression I want to make?”

Be sure to make the most of it.