From my vantage point, you could see the moment he realized he’d made a horrible decision. Seconds from impact, the look of fear in his eyes spoke volumes.

“This is going to hurt,” they said.

As his body went up a few inches into the air and then fell to the ground, I didn’t know what to do.

Should I help my friend? Should I shield my ears from the sounds he was making? Should I drop to a knee and say a prayer?

I chose to do none of the above…

A baseball had just hit my friend in an area known as “the baby maker.”

It was during a practice after school, and our coach had hit him a ground ball. My friend, as he almost always did, stood pat and waited for the ball to come to him. And, as often happened, the ball took a crazy hop at the last second.

This happened to him fairly frequently.

Sometimes, the ball would hit him in the chest or shoulder. Sometimes, it would miss him completely and go into the outfield. Sometimes, his reflexes were good enough and he was able to react and catch the ball with his glove.

But not this time.

He was hit. In the baby maker.

His 3-inch jump into the air was, I assume, a defense mechanism of sorts designed to soften the blow. It was clear what was about to happen, but all his body could do was “jump a little.”

So, I laughed. We all laughed. I’m pretty sure our coach laughed, too.

But beyond being a funny scene, it was also a teachable moment.

Not just for baseball, but for life. 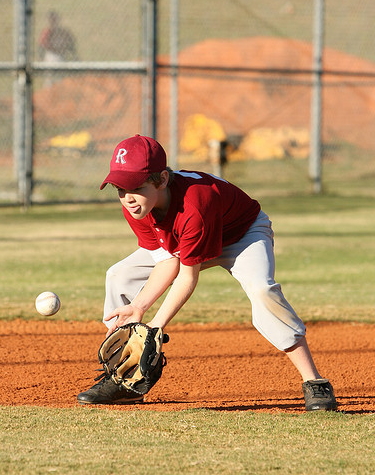 Some may be wondering what my friend did wrong.

“Why were you laughing at him? Wasn’t he a helpless victim?”

While it might seem as though my friend was powerless to prevent the predicament in which he found himself, that wasn’t the case. He wasn’t helpless. He wasn’t unlucky. He wasn’t a victim.

You see, the problem was my friend didn’t “play the ball.” He let the ball play him.

He didn’t read the bouncing ball coming towards him. He didn’t move his feet. He didn’t time it so he could get a nice, easy-to-field bounce. He wasn’t proactive.

No, he stood pat. And when you stand pat, you find yourself at the mercy of the baseball. Sometimes, she is kind. Other times, she demands a pound of flesh.

Life is often the same way.

Sure, some things can’t be avoided. Some things blindside us on random Tuesday afternoons when we least expect it.

But how many situations in life could we see coming in the distance if we took the time to look?

How many situations are telegraphed well in advance?

How many situations could be avoided (or their impact lessened) if we were proactive instead of reactive?

You know this, of course.

You took out your crystal ball, saw the likely repercussions for not changing your ways, and decided to be proactive.

What about that blog of yours?

The Blogging Graveyard is Filled With Passive Bloggers Who Stood Pat

There are many reasons blogs fail.

However, an often-overlooked reason blogs fail is passivity. Their owners stand pat, fail to adapt, and… well, hope the ball bounces their way.

And so, they don’t do things like focusing on their email list (when they know they should). They don’t bite the bullet and switch to a more reliable web host. They don’t work on improving their writing skills.

“I will do those things eventually,” they’ll think to themselves.

And maybe they will. Heck, maybe my friend will stop singing soprano one day. Anything is possible.

What I do know is “eventually” is a dangerous word that has taken down many an individual.

Don’t want to be its next victim?

Your list might have one or two things. It might have a few dozen. But once you have them, it’s time to get to work. It’s time to mark them off, one by one.

Today is the day.

Let’s get to work.