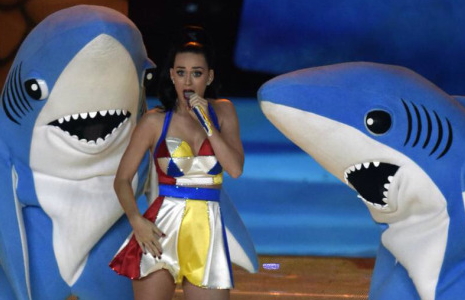 I didn’t just see a musician of questionable talent lip sync while sharks and palm trees danced around her.

I didn’t just see a collection of mostly-disappointing TV commercials.

No, I saw blogging lessons.

After catching a 3-yard touchdown pass in the third quarter (his only catch the entire game), Seahawks wide receiver Doug Baldwin decided to celebrate in a manner which would have made adolescent boys everywhere giggle uncontrollably. The rest of the world? Not so much.

Thankfully, NBC cameras cut away before Baldwin could assault the eyeballs of TV viewers.

Though the motive for his act is unclear, an incident earlier in the week possibly provides clarity. During practice, Baldwin taunted Sports Illustrated’s Peter King for the media’s characterization of Seattle’s receivers as “mediocre.”

After clearly proving his doubters wrong by successfully not dropping a 3-yard pass, Baldwin believed a celebration was in order.

As a blogger, you need to rise above the noise.

Don’t respond to mean-spirited or passive-aggressive comments/tweets with venomous tirades of sarcastic quips.

All they will see is two people rolling around in the mud.

That’s not a good look for you.

After defensive back Jeremy Lane broke his arm in the first quarter, the Seahawks were forced to make a change. In place of Lane, who had just made a drive-killing interception, Seattle inserted the young — and untested — Tharold Simon.

The Patriots capitalized and torched the young Simon repeatedly for the next three quarters.

A slightly more applicable lesson for bloggers relates to the benefits of contingency plans.

Maybe you’ll get sick. Maybe you’ll lose your job. Maybe your beloved pet will pass on. Whatever it is, “it” will make blogging very difficult for you.

So, while you hopefully never need to use them, go ahead and write one or two “rainy day” posts.

When the unexpected happens, you’ll be glad you have them.

No one selected Seattle receiver Chris Matthews when he came out of college in the 2011 NFL Draft. Signed as an undrafted free agent, Matthews was cut by the Cleveland Browns before the start of the 2011 season.

Not able to catch on with another NFL team, Matthews spent the next couple years playing football in Canada. After being released by the Winnipeg Blue Bombers, Matthews got a job as a security guard for Foot Locker.

Matthews finally broke into NFL with the Seattle Seahawks this season.

During the Super Bowl, he caught his first pass in the NFL. Then he caught 3 more, including a touchdown.

Had Seattle won, Matthews easily could have been named the game’s MVP.

Want to succeed as a blogger? Want to build a following? Want to fulfill your dreams?

It would have been very easy for Chris Matthews, while working at Foot Locker, to lose sight of his dream. But he didn’t.

And neither should you.

Go With Your Best

With less than 30 seconds remaining in the game, Seattle had the ball on the one-yard line. They had momentum, one timeout remaining, and enough time to run two — possibly three — more plays.

Score a touchdown, they win the game. Don’t score, they lose.

Armed with arguably the best (and unarguably most ridiculous) running back in the game, it was clear to most what Seattle needed to do: hand the ball to said running back.

Of course, that’s not what Seattle did. To the amazement of many, they threw a pass, it was intercepted, and the Patriots were Super Bowl champions.

When you have the opportunity to write a guest post for a blog more popular than your own, any ol’ submission won’t do.

No, you need to offer up your very best.

Alas, too many bloggers save their best work for their own blogs.

But bloggers, time and again, will submit a run-of-the-mill post to the 100-reader blog. They’ll save the “best thing I’ve ever written” post for their own blog and its 10 readers.

No offense, but bloggers who do this are bad at math.

You should want your work to get in front of as many people as possible. If that’s your blog, great. But if your readership isn’t where you want it, you need to go out there and convince people to come to your blog. Convince them to join your mailing list.

How do you do that?

By giving them your very best.

Nationwide Insurance depressed the world with one of their commercial during the Super Bowl.

No, it wasn’t the commercial featuring Mindy Kaling sunbathing in a park.

It was this commercial:

While their competitor took heat for making grown men cry for the first time since the last time they watched the ending to Kevin Costner’s Field of Dreams, State Farm started running a promotional Tweet touting fire safety tips.

To say State Farm’s approach was a better-received promotional strategy would be a ginormous understatement.

Don’t use scare tactics. Instead, provide value. Give your readers practical, actionable tips.

A “10 Reasons Your Blog Will Fail And You Will Die Sad And Alone” post will get attention, and it will definitely earn clicks. But it won’t be nearly as beneficial to your readers as a post teaching them how to do something new.

I’m not going to lie to you.

I’ve watched this video at least fifty times in the past week.

Let’s just say the commercial touches the muscular organ that pumps blood through my circulatory system.

It makes me want to get a puppy. And horses. And a stable. And, what the heck, a tan jacket like the guy is wearing.

When it’s used properly, blogging is a powerful tool that can positively impact the lives of your readers.

You can uplift them.

You can motivate them.

You can inspire them to better themselves and those around them.

Doesn’t inspiring your readers to better themselves sound like fun? Try it. Once you receive that first “thank you” email you’ll be hooked.

The brave souls who chose to throw caution to the wind and watch Katy Perry’s halftime concert were introduced to “left shark.”

Who is left shark?

Well, he is a rhythmically-challenged individual dressed in a shark costume who had the privilege (obligation?) to stand next to Katy Perry and “dance.”

It’s unknown whether his equilibrium was thrown off due to fluid in his inner ear or if a bee had found its way into his costume, but the inept flailing of left shark’s arms caught social media’s attention.

An Internet phenomenon was born.

#leftshark began trending on Twitter. Articles were written about him. One troubled individual even got a left shark tattoo:

Someone loved Left Shark enough to get a tattoo http://t.co/JjEJqZH8QT pic.twitter.com/qZRGDcLTto

Trends often end as abruptly as they begin.

The peace lily on my desk I keep forgetting to give water, a tattoo of left shark, and a blog post littered with trendy references.

Unless you’re blogging about current events, one of your goals as a blogger should be to try to write as much “evergreen” content as possible.

But for those other posts, be mindful of how “time” will impact them.

Don’t go crazy with the pop-culture references. Be careful with trendy topics. And don’t be afraid to update posts as needed.

Yes, even a football game can teach us about blogging if we’re willing to learn. The question is whether or not we will take what we learn and apply it to our blogs.

Will you inspire your readers?

Will you offer them practical, actionable tips?

Will you continue to follow your dreams even when obstacles arise?

If you answered “yes,” it’s time to get started.

Let’s go out there and win one for left shark.